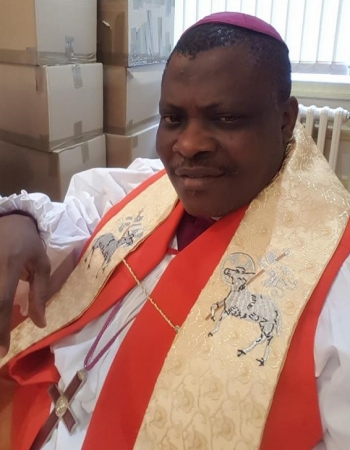 The Convener of Apostolic Round Table,  Dr. Bolaji Akinyemi has sent a petition to the National President of the Christian Association of Nigeria, Archbishop Daniel Okoh asking him to remove the Chairman of the Lagos chapter of the Christian body, Bishop Stephen Adegbite.

Akinyemi alleged that Bishop Adegbite has been using his office as the Lagos CAN chairman to galvanise support for the APC presidential candidate, Asiwaju Bola Tinubu.

The Petition dated November 28 gives a graphic picture of how Adegbite has been working for the APC candidate.

This is in spite of the resolve of the national body not to be partisan.

While stating that his petition is not against the person of Bishop Adegbite, he said, there was a need to put him in check.

He cited the instance where Bishop Adegbite led Tinubu to hold a closed-door meeting with the immediate past President of CAN, Rev’d Dr. Sampson Ayokunle in the presence of some Executive members of Oyo state CAN.

According to him, “Adegbite stood in as both Advocate and Campaign Director of BAT and gave a reason why BAT Muslim/Muslim Ticket must be voted for at the meeting.”

Akinyemi also referred to the widely publicised statement of Bishop Adegbite on why Christians should support Asiwaju Tinubu.

He recalled a recent instance where  Adegbite used the CAN structure to invite Church leaders to the rally of the APC on November 26.

He said, “An official circular sent and duly signed by the Assistant Secretary for the appearance of all 57 LG chairmen of CAN on the campaign ground of APC beat public imagination, for which rebellion is already brewing. It is the lowest political depravity expected of us in support of ANY CANDIDATE OR POLITICAL PARTY.”

While noting that no church leader is barred from making a choice of party or candidate to support he said, “but being privileged stewards of Christ’s estate; the Church, and fathers of the Christian Faith whose calling is to be just to all and equitable in all circumstances, it is demanded of us to be moderate in ALL things.”

Akinyemi said he too has been getting tempting offers to support politicians but that he has had to turn such requests down because of the concern for the larger body of faith.

He cited several cases of his intervention in the polity adding that loyalty to CAN takes precedence over any other thing.

His words, “Our loyalty to CAN is too costly to be trampled upon by persons whose belly have become their gods.”

Making allusion to the constitution of CAN and citing several alleged infractions of Bishop Adegbite, Akinyemi said, “We hold that the action of the Chairman of the Lagos State Branch of the Christian Association of Nigeria and the appropriate disciplinary action should be taken against him.”

He called for Adegbite’s immediate removal from office.

Referring to Tinubu earlier in the petition, Akinyemi said, “If my position is judged for standing up for CAN, you will be right to conclude that I am against him.  However, I have never met Tinubu and have no reason whatsoever to hate him.

“If after due consultation with all Blocs in a National Assembly it is resolved and openly stated that the Muslim/Muslim ticket of Alhaji Bola Ahmed Tinubu and Alhaji Kashim Shettima is the choice of the Christian Association of Nigeria we will give ourselves to it. For now, we are awaiting the decision of the National Assembly of the Christian Association of Nigeria.”

Pele, Michael Ibru, Nigerian Pentecostals and the place of faith

I agree with the request or petition written by Dr. Bolaji Akinyemi.
However, my doubt is if the administrative policy of C.A.N would welcome such.
Nevertheless, in my observation, Adegbite is better-off as a campaign chairman for Tinibu rather than a state chair for C.A.N.
He has failed as a Christian, and he has failed as a leader.
I have no problem with his choice of Tinubu, he can do so as an individual, and not as a C.A.N. chair.