Trending Now
A “widow’s” lamentation and lessons for RCCG, others...
God’s word: A case for non-English speakers in...
Adeboye: Some women consider it privilege to sleep...
Despite challenges, God has been good to Nigerians...
Writers save lives, solve problems says Omotosho @...
Prince Harry’s book that hit 1.2m sales in...
Ex-Apola king, Idowu Animasawun celebrates 85th birthday with missions...
Nigeria can’t make progress if the Church is...
Peter Obi: I have not promised I will...
2023 elections and the imperative of divine timing
Home News Murdered Sokoto Christian lady was FCS Sisters’ coordinator, how police delayed rescue operation …PFN in crucial meeting
News

More details have emerged on how a student of Sheu Shagari College of Education Sokoto was murdered on Thursday, May 12 in the state.

The lady who goes by the name Deborah Yakubu was stoned to death by an irate mob for allegedly making blasphemous statements about Prophet Mohammed.

Deborah Yakubu was studying Economics. She was the sisters’ Coordinator of the Fellowship of Christian Students at the college.

A source in Sokoto told Church Times that the lady could have been saved if the police had acted promptly when her safety was not certain.

The source who was at the scene of the incident said immediately it was obvious the mob was determined to kill her the security officials of the school took custody of her. “The security men kept her and shielded her from the mob.

“They then invited the police. But the police did not make any move. They did not get to the school until the mob overpowered the school security and dragged the lady out before stoning her. If the police had come in time they would have saved her from being killed.”

The source said the police should be investigated if the government is sincere about getting to the root of the matter. “It is clear to me that they intentionally allowed the lady to be killed because they all believe she deserved to die. This is really unfortunate. As it is, we are not sure if the incident will not repeat itself.

“There is nothing a Christian says that is right before some fanatical Muslim.. It is not about whether the lady made a blasphemous statement. Beyond that, you don’t really know what statement to make that will ignite their anger.”

Many Northern youths are indoctrinated 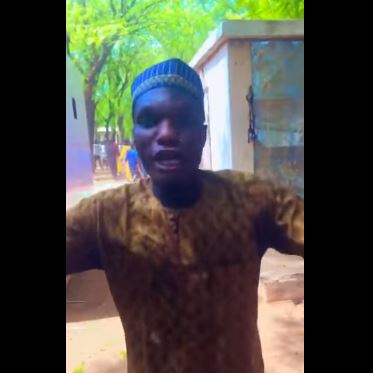 face of the man who allegedly led the mob action

Church Times gathered that many of the Muslim youths in the North have been indoctrinated to kill anybody who speaks against their prophet.

A source said, “Right from their youthful age, they have been indoctrinated. This killing will continue as long as they continue with their teachings on death for people who blaspheme. The only people who are temperate among them are those who have traveled out of the Islamic North to other parts of the country and who have mixed with civilised people. Even at that, you can’t even be sure of the educated ones among them. It is a tradition that has been there for a long time.”

Meanwhile, officials of both the Christian Association of Nigeria and the Pentecostal Fellowship of Nigeria have been holding meetings since the murder of the lady.

Some of the officials refused to comment on the matter. They however promised to make a statement after their meeting.

Understanding the full picture of the gospel from the kingdom perspective

Killing for any God in the name of blasphemy is satanic- CAN, calls for justice for murder Sokoto lady