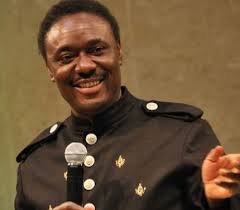 The founder of Fresh Party, Rev Chris Okotie has explained why its almost impossible for small parties to win presidential elections in Nigeria even if their candidates are the best

He told the BBC anchor, Helen Oyibo that unless Nigeria is restructured to make our political participation all-inclusive it will be difficult for small parties to win even if they have the best candidate.

Okotie was reacting to a question on the chances of the Labour Party’s Peter Obi, who is viewed as the third force besides the APC and the PDP.

He said the fact that only the bigger parties have ruled the country since the return to democracy in 1999 shows clearly how powerful they are.

‘Only the PDP and the APC have the national spread and network required to win the Presidency.No small party has such capacity.

‘Until the political system is restructured to shift the emphasis away from parties to the people, the dominant parties would continue to hold sway,’ Okotie said.

Okotie said he set up FRESH after running for president on the Justice Party, and the NDP  to promote his agenda for a paradigm shift.

He said he knew he would never be able to defeat the two dominant parties in a presidential election.

On why he didn’t join either the APC or the PDP: “If I join any of these parties, I would become part of the problem. Most of the big men go to these parties because all they want is power for personal aggrandizement. ”

Okotie said he won’t leave Nigeria despite its challenges. “I don’t want anyone to take from me the land that God gave to me.

He said he would continue to promote restructuring and its interim government component, ruling out the option of giving up.

‘I am already successful in my area of calling. I don’t need to run away. A time will come when people will depend on what I have said in this restructuring campaign, “Okotie explained.”

He also sympathised with Britain on the death of Queen Elizabeth 11, saying his prayers are with the British people and others around the world at this moment.