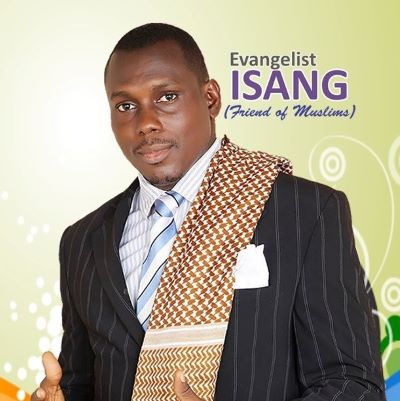 An evangelist, Isang Udo-Akagha has punctured claims by some Muslim scholars that Jesus was a Muslim. He used the Quran and the Bible to buttress his position.

Isang featured at a Christian/Muslim forum attended by a large number of Muslims and a handful of Christians.

The event  held at the front of Gowon Estate Central Mosque, Lagos on Saturday, June 26. The theme was: Is Jesus a Muslim?

Marshaling his point with so much passion, Isang disputed with his Muslim listeners saying it is wrong to say Jesus was a Muslim because all the scriptures quoted by Muslim scholars are wrongly interpreted.

Who is a Muslim?

He said, “The place to start is to first define the word Muslim. The word Muslim according to what I have been taught by my Arabic teacher means a follower of Mohammed and Allah and not a doer of the will of God as some Muslim scholars want us to believe.”

Quoting from the Quran, he said, “The Quran has given us a definition of who a Muslim is. The literal translation from what I am told is that Muslim means a submitter.

“The question then is; submitting to what? Quran Chapter 4v65 says a Muslim is somebody that submits to Mohammed and Allah completely. Mohammed has to be the judge in all matters of faith. If you have a dispute with your brother, you have to go to the prophet and find out what will Mohammed do in this matter? The definition of Muslim is clear. You must apply Mohammed’s teachings and ideas in all areas of life. That is what the Quran says.

“Today I hear some Muslims say they don’t want to follow Hadith but only the Quran. But the Quran does not permit them to do that.”

Isang also punctured the claim that Jesus was a Muslim because he bowed down and prayed like the Muslims.

He said, “When Muslim preachers read Bible, they misinterpret the Bible. They say because Jesus performed ablution, he was a Muslim. In John 13v5 we see the example of how Jesus performed his ablution.

He said the Quran had commanded that if the Muslims want to know anything about the Bible, they should consult Christians because God had prepared Christians to help the Muslims have an understanding of the Bible if they wish to know.

The word Father is not used in Muslim prayer

He said, “The Ablution that Jesus performed was not for prayer. He and his disciples were having dinner when he washed their feet. The purpose of ablution in Islam is to wash away the sins of the Muslims. But Jesus is against that. Jesus said this is my blood of the new covenant which has been shed for your sins. Jesus said his blood is what will wash away sin. That is not acceptable in Islam because it is believed that it is the water used during ablution that washes away sin”

The evangelist who said during the debate that he had been attacked and reported to the police because of his apologetics and the fact that he comes to the mosque to dialogue with Muslims said the words of Jesus are too strong to be ignored,

“In Matt 28v20, Jesus said, “I am with you always” No other person can say that. No prophet in Islam has said that. That Jesus made that claim that he is everywhere like God; is enough proof that he is God. I believe every Muslim deserves to hear the truth.”

Ustaz Muritala Mohammed Chukwuemeka who spoke for the Muslims insisted that “Jesus did many things that Muslims do. That is why we say he was a Muslim.”

He stated that Jesus believed in One God which Muslims also believe in. He spent so much time disputing the trinity; saying Christians worship three Gods: Father, son, holy spirit.

He also observed that the word Christianity is not in the Bible. He said further that those who do the will of God are Muslims because they pray five times a day as against Christians who only go to Church on Sundays.

He disputed the claim that Jesus died for our sins but at the same time supported some other portions of the Bible that seem to appeal to him.

According to him those who will make heaven are those who follow the five pillars of Islam.

In the rebuttal session, Isang restated his position. He said Allah in Quaran 10v94 had told Mohammad to always go and meet the people of the book (Christians) to explain what they don’t understand.

During the cross-examination session, Isang asked specifically from Chukwuemeka if Muslims do ablution the way Jesus did. Rather than answer, he became evasive.

Isang also noted that in John 17v1, that Jesus lifted his eyes to heaven. He then asked,, “do Muslims look up to heaven and say, father?.” Chukwuemeka could not respond.

But during his cross-examination, Chukwuemeka asked Isang if the word Christianity is in the Bible. Isang responded by saying, the name Christian was invented by people in Antioch who saw that the believers were doing like Jesus.

“People called believers or followers of The Way, Christians. But in the real sense, Jesus did not come to start another religion. He came to give eternal life. And that is what I want you to understand.”

Chukwuemeka then asked Isang to tell him a specific place in the Bible where Jesus said he was God. Isang responded by quoting a number of scriptures that attracted an uproar.

He said “In Matt 18v20 Jesus claimed he is God because its only God that can say what he said in that scripture. He said where two or three are gathered in my name, there I am in their midst. No other person in human history made that claim. He also said in Matt 28v20 that “I am with you always till the end of the age. Only God can say that. If God is the only one that can be everywhere at the same time, and Jesus said he will be in our midst all the time when we pray and that he is with us always, then, he is God.”

The debate which was moderated by Rev David Adesina ended with a question-and-answer session that bothered on the issues raised.