Trending Now
Adeboye: Some women consider it privilege to sleep...
Despite challenges, God has been good to Nigerians...
Writers save lives, solve problems says Omotosho @...
Prince Harry’s book that hit 1.2m sales in...
Ex-Apola king, Idowu Animasawun celebrates 85th birthday with missions...
Nigeria can’t make progress if the Church is...
Peter Obi: I have not promised I will...
2023 elections and the imperative of divine timing
RCCG announces Prof. Aboaba’s passage says “He is...
The Paternoster Code: Debunking the age-long misconceptions about...
Home News Journalism awardee dedicates prize to Ijesha people, appreciates Jesus
News 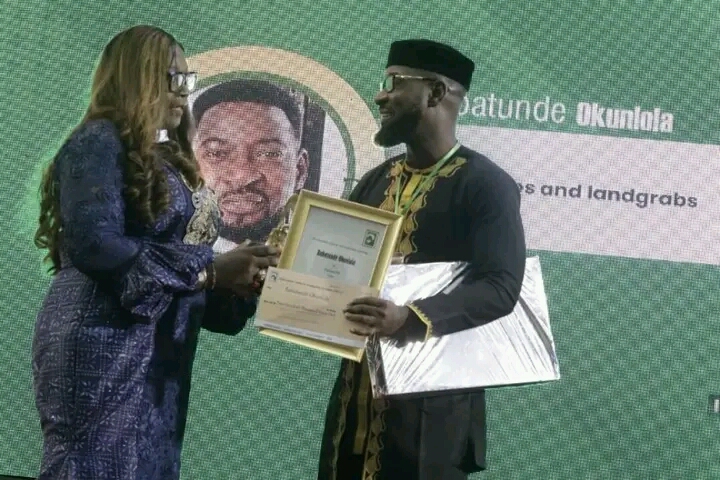 Okunlola receiving his award at the WS Centre for Journalism

Winner of the Radio category of the 17th Wole Soyinka Centre for Investigative Journalism Award, Babatunde Okunlola has dedicated the award to the Ijesha people of Osun State while also appreciating Jesus Christ for making the award possible

Okunola is the Head of Programmes and Content at the Diamond FM, Osun State.

He won the radio category of the journalism award with his entry titled, ‘Gold Rushes and Land Grab’

The story exposed the illegal Chinese gold miners in Osun State whose activities have displaced several communities from their ancestral land.

Explaining why he dedicated the award to the Ijesha people, he said, “ The Ijesha people were at the centre of the story. They were deceived to surrender their lands. Traditional heads, lawmakers, non-governmental organisations, and other state actors also played roles in the story.. I dedicate the award to them because I  was able to tell their story. I hope their voices will be further amplified,”

While appreciating Jesus for the award, he said. “Over the course of my career, I have got several honours. But I must confess that this one is really special. Gratitude goes to my Lord and Savior Jesus Christ, the giver of all gifts,”

Okunlola expressed deep appreciation to the Wole Soyinka Centre for Investigative Journalism for the initiative that recognises the hard work of journalists.

He also appreciated the founder of his station, Apostle Oluwole, the General Manager, his other colleagues, and his family.

The award has other categories including Television, Print, Online, Editorial, Cartoon, Picture, and Lifetime Award categories.