Trending Now
Uma Ukpai prays for Obi says, “Lord do...
Bonnke’s successor, Evang. Kolenda drops bombshell, says, “Anointing...
A “widow’s” lamentation and lessons for RCCG, others...
God’s word: A case for non-English speakers in...
Adeboye: Some women consider it privilege to sleep...
Despite challenges, God has been good to Nigerians...
Writers save lives, solve problems says Omotosho @...
Prince Harry’s book that hit 1.2m sales in...
Ex-Apola king, Idowu Animasawun celebrates 85th birthday with missions...
Nigeria can’t make progress if the Church is...
Home News Help, cultists are after me, journalist cries out, says, “my life is being threatened”
News

Help, cultists are after me, journalist cries out, says, “my life is being threatened”

A journalist, content creator, and musician; Oseyiza King Oogbodo, has cried out over a two-time visit of some strange people to his house who are asking him to join a cult group 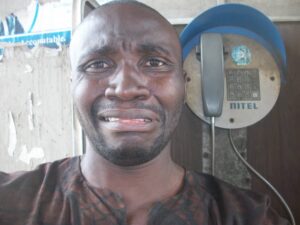 In a statement made available to Church Times, Oogbodo said the strange visitors first came to his house on November 14, 2021, at about 9.30 pm.  They pointed guns at him. They told him his late mother was a member of their cult and he was the one she chose to replace her after her demise.

“They claimed I’m the chosen one because I’m my mother’s favourite child, the only one who shared the same birth month with her and spent the most time with her because of the affinity we had.”

Oogbodo said also that the men reminded him of a story he did while he was in the defunct National Mirror that Charly Boy was gay and the head of the Illuminati in Nigeria.

The men said they were the ones who prevailed on Charly Boy not to sue his employers then; insisting that the time had come for him to join their cult.

Oogbodo said, “Listening to them, I was in both shock and awe and told them I didn’t believe them. They said it didn’t matter and I should be prepared to do their bidding willingly or unwillingly and that it was only after my initiation I would know everything about them and equally importantly, my mother’s involvement with them as well as my expected role.

After the visit, he made a report at the nearest police station. The police gave him a number to call and promised to come to his aide when the men visit again.

But on Tuesday, January 11, 2022, two men different from the first set of men came to his house in the night again.

“They wanted to know my decision on joining the cult their colleague came to tell me about. I asked the name of the cult and they said they were Ogboni ‘something’ which I can’t remember now. When I wanted to ask more questions, they asked if my interest meant I was now ready to be a member.

“I said I needed to know more to make up my mind and they said they could only tell me more on membership but one thing they could tell me was that my membership would be to my own greatest benefit as it would make me influential.

“I asked if I would be required to sacrifice a human life or even lives and if my mother actually sacrificed anyone. They both laughed and one of them responded that strong people did whatever they had to.

“Then they demanded to know what my membership conclusion was and I said they should give me more time and they said they would get back to me but I should know I was running out of time and they left.”

He visited the police station again to lodge a complaint but he was told he had to report to a higher authority in the force.

While making a public disclaimer of the men, he said he does not for one moment believe the story of the men that his mother was in their cult.

He said also that he is not interested in their offer urging  Nigerians to take note of his stance.

Oogbodo as a journalist has worked for the Comet, The Nation, Nigerian Compass, National Mirror, The Point and now runs his own online newspaper, Oseyiza Oogbodo Blog.

He edited Royal Africa Trade magazine and Danfo Express newspaper and acted in several movies: Esther – The Queen Who Stopped A Genocide, Ika Nation, The Cross And The Moon, Bleeding Soul, The Undead.

His other acting credits are in the short YouTube movies: Nigerian Man Forces His Daughter To Marry A Yoruba Man And Regrets It Forever and Nigerian Man Decides To Kill His Girlfriend Because She Didn’t Give Him Sex.

His debut album is Carry Your Own Cross and his most recently released song is Person Need 2 Blow (A Cappella) which can be streamed on his Audiomack and SoundCloud channels.