Trending Now
Adeboye: Some women consider it privilege to sleep...
Despite challenges, God has been good to Nigerians...
Writers save lives, solve problems says Omotosho @...
Prince Harry’s book that hit 1.2m sales in...
Ex-Apola king, Idowu Animasawun celebrates 85th birthday with missions...
Nigeria can’t make progress if the Church is...
Peter Obi: I have not promised I will...
2023 elections and the imperative of divine timing
RCCG announces Prof. Aboaba’s passage says “He is...
The Paternoster Code: Debunking the age-long misconceptions about...
Home News Apostle Suleman: I just escaped an assassination attempt where 7 people were killed 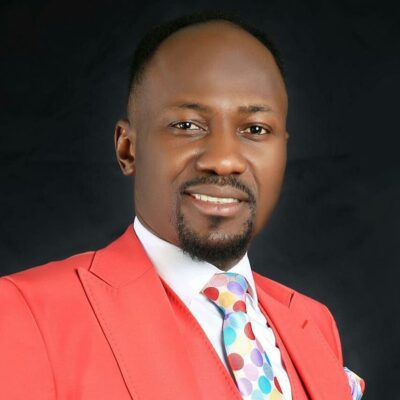 Apostle Suleman: I just escaped an assassination attempt where 7 people were killed

Founder of Omega Fire Ministry, Apostle Johnson Suleman has said he just escaped an assassination attempt where seven of those in his convoy were killed.

He made the disclosure in an online video on Friday, October 21 monitored by Church Times

Suleman who looked distraught in the video gave a graphic account of how his convoy was attacked leaving seven people dead.

He said,  “Since 2017 there are certain things that have been happening that I have been quiet about. Even if you are the most careless somebody on earth, you will not give yourself to so much scandals. There are things people don’t know even though some people have taken advantage of that.

“The reason I am coming out to talk now is that they have done all that and have since discovered I am still moving on.  Now they have decided to make attempt on my life.

I just escaped an assassination attempt where seven people were killed. My car was attacked. They opened fire on my car and kept spraying it with bullets including the bus behind me. My wife and my kids were there.

“The escort car was behind. They killed the policeman and some other people in the car, seven people. We were all moving in a convoy. People who did this are expecting me to come out and mention their names so they will deny. I won’t do that.

“But the truth of the matter is this, you can’t kill me.  My life is in the hands of God. I am a man of God. And those who are among those attacking me, you are building on what you don’t understand. You have joined the fora because you want to chase clout, but you don’t know where the fight started from.

“There are things you don’t understand. You don’t have an idea of what began in 2017. The people who are behind it. I am alive for those who have been calling, my family is fine. I feel bad for the lives that have been taken. We are mourning. But Jesus is Lord.

“May the souls of those departed rest in peace. For the young men who opened fire and keep wasting people, I won’t take your life. But the seed that you sow you will reap it. I want Nigerians to know that a coordinated lie swallows an uncoordinated truth. With time the truth will come out.”

Apostle Sanyaolu replies CAN president, explains why he will remain in APC’s campaign council