Participants at the opening ceremony of COPE 2021

President and founder of Gospel Unlimited, Professor Duro Adegboye has advised Christians to stay where God has called them to work rather than comparing themselves with some other people in ministry.

The missionary evangelist gave the advice at the opening session of the 2021 Conference of Practical Evangelism holding  at Gospel City, Offa, Kwara State.

He urged them not to fall into the temptation of becoming pastors or starting a church if God has not called them to the pastoral ministry.

Adegboye who has spent about 53 years as an evangelist said God has been faithful to him even when he does not run a church he could fall back to for regular support.

The missions enthusiast who was one-time dean of Faculty of Science, Ahmadu Bello University, said God has proved himself beyond reasonable doubts.

He emphasised that it pays to stay in one’s calling. “I am a testimony of God’s grace and faithfulness. Many people find it difficult to remain in their calling because of their pursuit of money and the fear of survival. But I have good news for them. If they remain where God has called them, they will blossom.”

Citing examples of what God has done, he said, “As at 2006, I had no block put down somewhere I could call my own. We were renting halls for COPE conferences every year and I have been doing ministry for years before that time. We do not run a church.

“But that same 2006  God through somebody gave us 12 plots of land. That is where we are today. On the 12 plots, we have been able to erect 13 buildings while about eight other foundations have been laid.”

Today, the Gospel City according to him is given to churches free of charge for conferences and retreats. There is comfortable accommodation for those who come to use the place for their events. 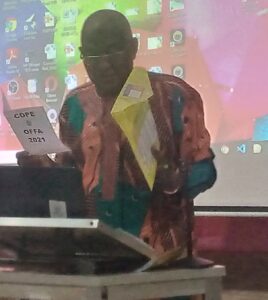 He said he could not afford to charge for the use of the place because he never imagined that he would put up such structures.

On how the buildings came about, he said, “The Lord touch the hearts of people to support the work we do here. That is how things have been happening.”

The conference which started on Wednesday, September 29, 2021, is expected to end on Friday, October 1. Several missionaries from across Nigeria were present at the opening ceremony.

Judgement awaits bishops who use money to become one-Anglican Primate